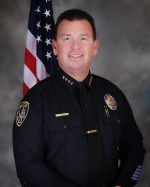 Chief Larry V. Gonzalez has over 25-years in the Riverside Police Department. He was hired as a Police Officer in September 1993 where he worked as a Field Training Officer, Gang Unit Investigator, and a member of the Department’s Defensive Tactics Training Unit. In November 2001, Larry was promoted to Sergeant. As a Sergeant, he worked patrol and was later transferred to the Chief’s Office where he worked as the Personnel and Training Sergeant. Larry was the Department’s Training Coordinator during the time the department was under the Attorney General’s stipulated agreement and played a pivotal role in meeting the training demands during that time period.

In March 2005, Larry was promoted to the rank of Lieutenant. As a Lieutenant, Larry worked as a Watch Commander, the East Area Commander, Special Weapons and Tactics/Aviation Commander, and the Support Services Lieutenant. He also held collateral assignments as the K9 Commander and Force Training Unit Manager. In May 2015, Larry was promoted to Captain where he maintained management oversight of the Support Services Division (Personnel, Training, Internal Affairs, Records, and Dispatch). In May 2017, Larry was promoted to the rank of Deputy Chief of Police where he was assigned as the Administrative Deputy Chief. As Deputy Chief of Administration, Larry provides oversight to the Support Services Division, Administrative Services Division, and the Community Services Bureau. The Deputy Chief also participates in activities involving personnel, Internal Affairs, training, public information, and assists with policy development and implementation.

Larry has been an instructor at the Riverside Sheriff’s Academy for over 20 years where he teaches Use of Force, Internal Affairs, Laws of Arrest, Defensive Tactics, Civil Liability, and various supervision courses. He is recognized as Subject Matter Expert in Police Use of Force in both the State of California and Federal Court. He has been a panelist and guest speaker at several venues related to Use of Force in Law Enforcement and has served on various Commission on Peace Officer Standards and Training (POST) committees.

Larry earned his Bachelor of Science degree in Workforce Education and Development from Southern Illinois University. He is also a graduate of the FBI National Academy class #233 in 2008, and Senior Management Institute for Police sponsored by the Police Executive Research Forum (PERF) in August 2016.