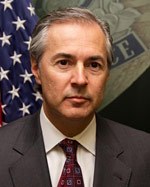 When Ramon Alvarez took over the Riverside (CA) Lincoln-Mercury franchise in October 1995, it was a failing dealership that sold 10 vehicles a month.  Since that time,k Alvarez has:

As he has built his high-line vehicle business, Alvarez has been increasingly recognized for his ability to successfully sell to the region’s emerging markets.  A Fortune magazine article in 2001 called him a trailblazer who was “enabling Ford to reach its most dynamic future market – minority ethnic groups.”

Alvarez currently oversees all Hispanic marketing efforts for Lincoln-Mercury in California and is founding member of Ford Motor Company’s Minority Dealer Association.  In 1999, he led the Hispanic Chamber of Commerce as President.

In addition to running one of the largest minority-owned dealerships in the West – one of only two Hispanic Jaguar center in the country – and as of May 2009 earned th e#1 Hispanic owned business sin the Inland Empire – Alvarez has served the motor vehicle industry in several capacities:

Among man awards and distinctions, Alvarez Lincoln-Mercury has twice won honors in the Ernest & Young Entrepreneur of the Year program.

Alvarez has made a very strong commitment to supporting educational, social, cultural, and sports activates in the riverside area anda has gained wide appreciate for his civic mindedness.  Among his activities:

In 1997, Alvarez became the founding sponsor of Fiesta De La Familia, which has grown to be the largest Hispanic cultural event in the Inland Empire.  In 2005, the family-oriented, alcohol and tobacco-free event attracted over 70,000 people.

Ramon Alvarez was born in San Diego, California and raised in Tijuana, Mexico.  He attended Southern College and graduated with a degree in Business Administration–Finance in 1980.

He currently lives in riverside, California and is married to Araceli, with three children, Maria Josse, Ramon Jr. and Sebastian.